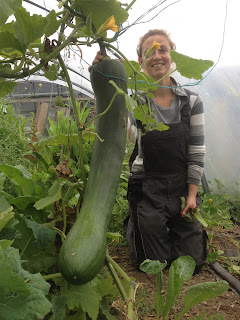 My name is Holly, so maybe it’s not massively surprising that I am a botanist’s daughter. Since I came home to work on the farm and in our family business, Brown Envelope Seeds, I have met three people, through work, who have daughters named Holly. One of them was the head of Organics in the department of Agriculture, Frank Mackan. He came to speak to my class (I’m doing a masters in organic horticulture because I still get confused between parsnips and turnips and I’m meant to be the future of Irish seed production). It was good to hear him, he was very to the point if you get me, he didn’t fluff up his sentences with nice words, it actually almost sounded like all the words he did say had full stops after them. But some things he expressed stuck with me. He didn’t preach the usual sort of floaty organic stuff, he said that he thinks organic methods are liberating, a farming system that doesn’t relying on any external inputs to function. How true. How empowering. He emphasised the importance of knowing what it means personally, to each of us as it’s something we will always be questioned on and well, argued with about if we are a part of the industry. That’s when I realised, for one, wonderful, I’ll have to be defensive now until I die, and two, I didn’t know, that’s just how I was raised. Much like a “Christian” who eats meat on good Friday and has sex before marriage with their neighbours wife, but like, still goes to church on Christmas day and would like baptise their kids or whatever. Since then, I’ve been doing a lot of thinking and reading about conventional farming, organic farming and everything in between. So yeah, anyway, this is apparently a thing, foody/horticultural people do, they name their daughters Holly. I suspect there’s a fair amount of Roses and Poppys and the like too. Get this, my sister’s name is Autumn. She lives in New Zealand now, and when I’m having an emotional day and lecturers keep saying things like “Autumn sowing” and “Harvest in Autumn” I miss her so much I sob inside but pretend that I’m just really into the different pruning techniques for summer raspberries as apposed to Autumn ones.

So we have an essay title at the moment which is this:
Critics say that Organic farming systems are unsustainable due to lower yields and cannot feed the world. Discuss.

This was good food for thought in the vein of finding out what I thought about it all. My initial reaction was “OF COURSE IT CAN THAT’S HOW WE ALL LIVED BEFORE CONVENTIONAL METHODS CAME ALONG AND STARTED RECKLESSLY RUINING THE PLANET AND THE FUTURE OF NATIONAL AND GLOBAL FOOD SECURITY” Of course there are many more aspects to it than that. A lot of the literature points out that our ever increasing population (9 billion by 2050) simply cannot be fed by a system which produces lower yields. This is the framework of the opinion that large scale, high input conventional food production is absolutely necessary. (but 70% of the worlds food comes from small farms?). So you know yourself, a bit more googling. Here’s the thing, 20% of the world is starving (more than 20% are obese?) but 33% of the world’s food goes to waste.
So yes, if we didn’t waste a third of the food produced no one would be starving. Organic yields are an estimated 80% of conventional ones (depending on the crop, some crops like soya produce higher yields). So even with 80% of the current food outputs, the world could still be fed and it could be fed organically. I think it’s also important to note that this research was sourced using meta analysis, cherry picking from different studies, to compare the two systems which may show bias towards on one side or the other. Results  also changed rather radically when crops were stressed, for example, when exposed to a change in temperature. In these instances, organic crops produced higher yields.
And sure only a month or so ago wasn’t it all over the news, the climate summit, in Paris. Due to climate change the temperature is expected to rise by 2 degrees**. Agriculture, namely methane caused by ruminants, methane from stored manure, nitrous oxide from soils and farm combustion from fuels, is Ireland’s single largest contributor to the overall emissions at 32.3% of the national total. This along with high stocking rates and other methods adopted by conventional agriculture is damaging soil faster than nature can create it and it is this, precisely, that threatens the future of global food production. So in the face of scarily close climate change which will stress plants, will conventional yields prevail? Previous to the climate summit, Ireland was instructed, by the 2009 European Renewable Energy Directive to reduce GHG omissions by 50%. What happened after that? They removed! Milk quotas. Simon Covney, speaking on Newstalk at the time, described it as “removing the strait jacket from Irish farmers” (shudder). He also told RTE that the increase in herd numbers would happen “while maintaining the existing carbon footprint of the agricultural sector.” Just as well really, when in the words of the Department of Agriculture website, Ireland’s emissions are “the highest of any country in the developed world”. Of course, in effect, the removal of milk quotas was far from maintaining the national carbon footprint as herd numbers increased. The boom in dairy production and beef exports translates as an increase in the national dairy herd by over 300,000 cows in the next five years, simultaneously emissions from agriculture increased by 0.48 million tonnes (2.6%) in 2013, four years after the implementation of the European Union Directive. Needless to say, soil compaction and milk production increased too. So much so, that milk is loosing value faster than hippies are naming their offspring after plants, and is now cheaper than water. I’m going to say that again, milk is now cheaper than water! If you are a dairy farmer or know one, you know how all consuming, painstakingly, tremendously hard it is to be a dairy farmer and their produce is worth more to us than that. I’ve gone off on a tangent now but it all ties in.

Peak phosphorus is predicted to be between 2010 and 2030. No doubt, NPK will then peak in price too. Farmers won’t be able to afford it, especially if substances that literally fall from the sky are more valuable than their produce. By which point, and already in many cases, their natural eco-systems won’t be in the best nick, what with soil increased compaction from even higher stocking rates and years of spreading synthetic fertilisers which destroy natural bacteria and fungi which exist generously from nature to do precisely what fertilisers do. So sustainable, is defined as, “able to be maintained at a certain level or rate”. Conventional farming is a system which relies on inputs which are running out, that damages the very resources it needs to function, a system surely far from sustainable and I’m being asked to write thousands of words on whether organic farming is sustainable?

The other frequently used anti organic argument is cost. Organic food is more expensive. What a nightmare! Imagine, having to pay more money for food because it was produced without animal cruelty, slave labour and chemical fertilisers, which remove the platform for which future generations need to be able to eat? Like, if that’s the case, if we have to spend, often double the money on a chicken or maybe even a full euro for a head of broccoli, we might not even be able to afford dessert. Just when the first world had really started identifying as an obese one.
But for a second, lets just entertain the idea of a world that is fed organically. Is it possible that if organic produce supplied more than the current 1%, that with that, might come a bit of competitive pricing like any other industry? and is it potentially true that if the same amount of money, research and employment went into the development of organic fertilisation methods that yields might increase? If organic yields were as high as conventional ones and the organic produce actually sold, we could potentially still afford dessert and regular smart phone upgrades and future generation might be able to survive too. I know it’s annoying, it’s like having to pay the poor old dairy farmers for their milk, you’d swear it were worth it or something.

So when I stop writing this blog and do something more productive with my time, like I dunno, write my essay, I think rather than discussing whether organic farming is unsustainable due to lower yields and wondering whether it can feed the world or not, I’ll probably focus a bit more on dispelling the myth that hunger in the world is a result of the shortcomings of agricultural outputs and rather, question why are people starving? (potentially something to do with the fertiliser industry providing 24,844 jobs in the US alone) and beg the question, is conventional farming sustainable?


I’ll stop now, mainly because I’m tired but also because I’m putting the pro in procrastination now and should be doing that essay. It’s actually fairly close to the deadline and me and Mum are off to America tomorrow for the Organic Seed Alliance Conference (EEEEK!) I didn’t get a chance to slate Organics yet. Stay tuned for that. Holly

Posted by Madeline McKeever at 7:13 AM