There is a workshop on Propagating from Seed
at Brown Envelope Seeds today at 2pm. Cost €20, (but will also accept marmalade, foot massage or two hours of weeding) 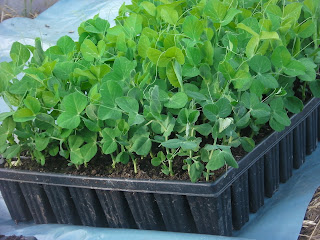 In case you can't make it Here are the notes

Germination
Seeds are a plant’s way of moving around. They are also its way of evolving. Inside each one is an embryo containing genetic material from each of its parents and a store of food. In monocotyledons the energy is stored in the endosperm of the seed and in dicotyledons it is in the first two leaves which are folded up inside the seed. The bigger and fresher a seed is the more energy it has and the better its chances of survival. Because seeds are alive they respire, which takes energy. As they age, they loose energy, and this process is faster in warm, damp conditions. This is why seeds are best stored cool and dry.
Conditions necessary for germination
Seeds are in a state of dormancy when dry, and for most, all that is needed for them to germinate is warmth and moisture. For a few, dormancy must be broken down by time, chilling or by causing some damage to the seed coat. In a few cases light is also necessary. 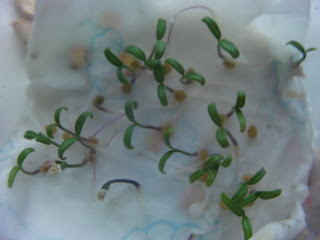 Germination Testing
It is easy to test your seed for viability. Put a few seeds on kitchen paper in a plastic box or in a small pot of compost. Then put them somewhere warm and see how many come up. The table below shows what temperature is best for germinating some vegetable seeds. Note that some seeds like it cool like lettuce and spinach. The table below gives approximate times and percentages of germination at different temperatures. The numbers in brackets denote the number of days it took for germination to complete at the specified temperature.

Dormancy
Some seeds become dormant and will not germinate without certain conditions occurring. Winter Purslane and Lamb’s Lettuce are woodland plants and they normally produce seed in early summer. The dormancy in the seed is useful as there would be little light for the plants if they germinated immediately. The seeds will not germinate until autumn when the leaves are falling off the trees. There are two kinds of dormancy in seeds, coat imposed dormancy and embryo dormancy.
Seed coat dormancy
Seed coat dormancy can act by physically preventing water or oxygen absorption by the seed, or by mechanically restraining the radicle from growing out of the seed. It may also contain growth inhibitors or prevent the release of growth inhibitors from the seed.

Breaking dormancy
Dormancy may be broken down in different ways. Environmental factors include drying, chilling and light.  Some seeds loose their dormancy below a certain moisture level, drying them is referred to as after-ripening. Chilling may also be effective. Some seeds need a cold period while in a fully hydrated state. This applies to Lamb’s lettuce and Winter Purslane which we germinate by sowing in damp compost and then chilling in the fridge for a few days. Spinach also responds to a chill period. Many tree seeds need this treatment which is also known as stratification. The third important factor is light. Some seeds such as lettuce and docks need some light to germinate.

Dormancy in most vegetable seeds is minimal and has probably been bred out of domesticated plants over time.
Different kinds of seeds germinate best at different temperatures.
Time taken to germinate.
As you can see in the table below, tomatoes peppers, aubergines and melons are unhappy below 70ºF, whereas spinach germinates best below 60ºF. The time taken to germinate (the number in brackets) also varies considerably. It tends to be shortest at high temperatures which is what you would expect as most metabolic processes speed up at high temperature. Quick to sprout are all the cabbage family members, the cucurbits and lettuce. They will all come up in three or four days in a propagator at about 20C. The tomatoes, the onion family and legumes should all be up with in a week. Peppers aubergines and members of the carrot family are slower and can take two weeks, or more. Some seeds seem to germinate better in compost than on tissue. 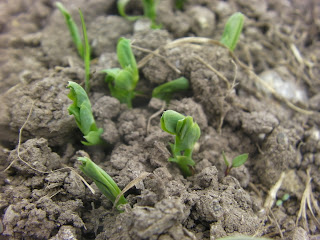 Direct Sowing
Seeds can be sown directly in the ground when conditions allow. Crops such as carrots and parsnips, do not transplant easily and are usually required in quite large numbers so are sown directly in the soil. For direct sowing a fine seed bed is necessary so that seeds can be placed evenly under the surface and not get lost. As a general rule the depth at which seeds should be sown is one to three times their diameter. If conditions are dry this can be a bit deeper. The larger the seed the deeper it can be sown.
A drill is made the correct depth with a stick or the edge of a hoe and the seeds are spaced along it.  They are then covered over and may be watered if the soil is dry. 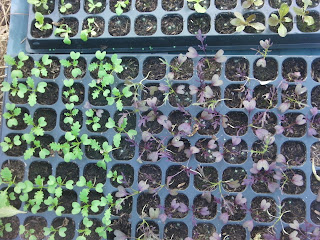 Sowing in trays or modules of compost
Seed compost is more finely sieved than potting compost and is low in nutrients, because young seedlings have their own store of energy and nutrients. Sow seed sparingly in trays or modules to make it easier to prick out later. Gently water the top of the compost with a spray bottle or watering can fitted with a fine rose. Doing this first avoids disturbing the seed, once you have sown them.
Cover the seed lightly with compost, and if they are likely to dry our cover with a pice of plastic of paper, until they have emerged. Labeling is important so that you remember where everything is. In case the label is lost, it is also a good idea to make notes in a notebook, of where and when seeds are sown. Sowing in modules allows seedlings to be transplanted with minimal root disturbance.
Pricking out - transplanting and potting on
After a month or so, when the seedlings look crowded it is time to pot them on.  The seedlings will have used up their internal energy store and will be producing their own leaves and photosynthates. They will now need more nutrients in the soil to grow. Potting compost is usually coarser than seed compost and can be home made using a combination of good garden compost, or farmyard manure, soil, and leaf mold. Seedlings should be handled by their leaves rather than their stems, which are more liable to get damaged. By holding onto one of the leaves and pulling gently the seedling can be eased out of the compost. It can then be put in a larger container of potting compost  by making a small hole in a pot of potting compost. The compost should be gently firmed around the seedling so that the soil level is the same as it was in the original container and then carefully watered. In the same way plants can be planted out in soil. When the roots start to circulate inside the pot they are ready to out.
Propagating from seed not difficult and is more economical than buying plants, but it does need some time and effort devoted to it.
Good luck!
Posted by Madeline McKeever at 11:41 PM