We have beef for sale at the moment. Every year we fatten a few heifers and sell some of the beef directly from the farm. This year the heifers came from the farm of Con and Magdalena Burns in Union Hall. This is Con below, selling his potatoes at Skibbereen Farmers Market. 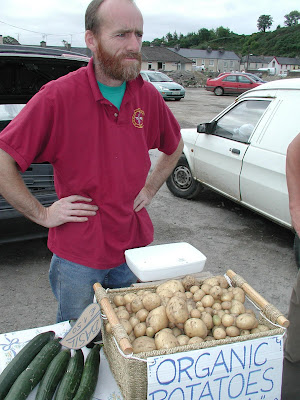 And this is the bunch last May. 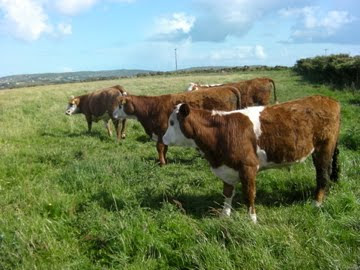 They spend the winter in the barn, eating silage, lying on straw and making compost for the gardens at Brown Envelope Seeds. 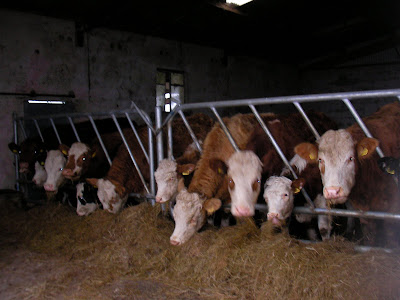 Finally they go to Walsh's, a local abattoir and butcher. 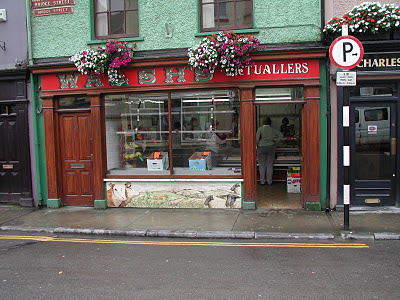 Price list for beef collected from the farm or delivered to Skibbereen Farmer's Market:
Sides €4/kg dead weight, plus butchering €150

A young neighbour of mine, Oisin Coakey is starting his final year in agriculture in CIT. He is hoping to do a project on quinoa and would like to hear from other people who have tried growing it. So please let us know how you got on if you grew it. Here is a summary of my experience with it.
Quinoa, Chenopodium quinoa, is a small grain crop from South America. It is in the same family as spinach and beet, and is even more closely related to the weed Fat Hen or Lamb's Quarters, Chenopodium album, which which it can cross. It was domesticated in the Andes several thousand years ago. It is known there as 'the mother of all grains'. It is a hardy annual crop that is tolerant of both low temperatures and low rainfall. It grows from the coast to altitudes over 10,000 feet.
It is valued for its high protein content and the quality of the protein, which contains a complete balance of amino acids for the human diet. It is as good a source of protein for babies, as milk powder, and as it is not a cereal, it is gluten free. The leaves can also be eaten as salad or cooked like spinach. 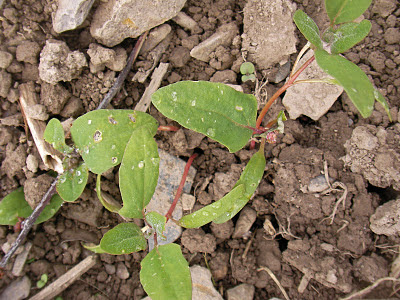 Quinoa seedlings in May 2010
I have been growing small patches of quinoa for three years now. The first variety I tried, in 2009, was Temuco, which I chose from the Real Seeds catalogue, on the grounds that the heads stood up to bad weather better than other varieties. In 2010 I grew a larger patch of Temuco and a few plants of another variety, Red Head, which I got from Adaptive seeds in Oregon. Red Head had been selected for open heads that stood up to damp weather, by Frank Morton of Wild Garden Seeds. This year I got some seed from Kai Schulze Boeckenhoff, in Ballydehob. He has been growing quinoa for several years from multi coloured seed he originally got in the healthfood shop. I chose his variety this year as I found it difficult to get the awful tasting saponins off the Temuco. Kai said that he removed the saponins simply by washing the seeds in water. So, I am looking forward to seeing if his cleans up more easily than the Temuco. 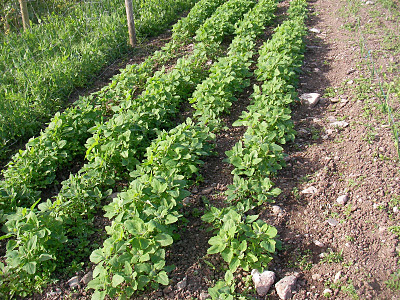 Quinoa in June 2010
Like its relative Fat Hen, quinoa grows like a weed. It is almost indistinguishable from it when it is young. I grew it in rows about a foot apart and thinned the plants to about an inch apart. They could have been thinned a lot more. In 2010 it was sown on the 9th of April but it was a bit later in 2011, I think, but I forgot to record the date. 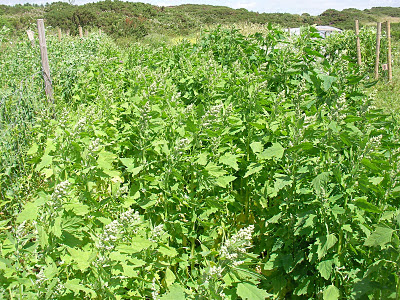 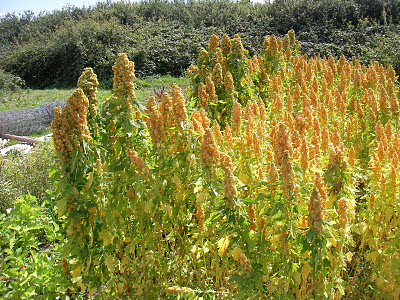 Quinoa August 2010
Quinoa can cross with fat hen and I think some of the chunky looking plants on the left above were hybrids. They had more branched stems like Fat Hen and were very vigorous. 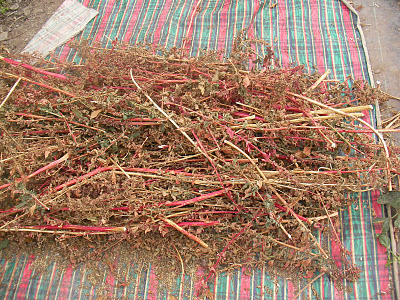 2010 harvest of quinoa variety Red Head
I harvest quinoa when I see the birds starting to do it. I left the Red Head a bit too long and the birds got a lot of the seed. 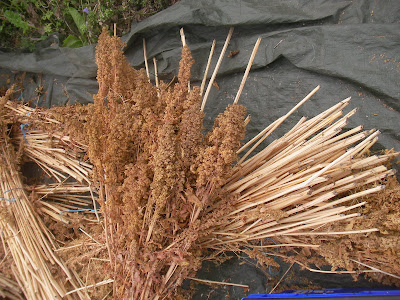 2010 harvest of quinoa variety Temuco
We got the Temuco in in fine weather, tied it in bundles and let if finish drying in the Poly tunnel. We threshed it by running it through the shredder and then winnowing. The Temuco yielded over 2kg from a bed about 8sqm. I think that works out at 2.5T/ha Given that a 1kg bag in the health food shop costs €6.92 this could be a valuable alternative crop for Ireland if mechanised harvesting and removal of the saponins from the seed coat were possible.
I haven't found an easy way easy way to remove the saponins from quinoa seeds yet. I have toasted it on a pan until it starts to pop like popcorn and then rubbed it in pestle and mortar, simulating the process used in the Andes of heating it and then dancing barefoot on the grains in a stone basin. Yellow dust accumulates and can be removed by sieving the seeds. This removes a lot but it must still be rinsed a good deal while cooking, several changes of water will pretty much remove the rest. Alternatively, soaking the seeds in an alkaline solution before cooking, with several changes of water also works. For an alkaline solution I have used bicarbonate of soda and wood ashes both of which worked better than plain water but it still took a lot of rinsing.
Posted by Madeline McKeever at 7:42 PM 11 comments: