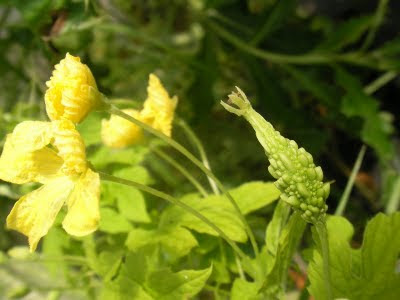 These nasty little vegetables taste like poison and are capable of destroying a perfectly nice curry. I first came across them in the Philippines, where you never knew where they would turn up, and all meals had to be studied carefully to make sure they weren't lurking under the rice. I don't know why I tried to grow them this year because they really didn't want to grow here, any more than I actually want to eat them. I forgot they were there, and found them today amongst the scutch at the edge of the tunnel. I might have to eat one if it gets bigger than a jelly bean. They're good for you.
Posted by Madeline McKeever at 11:56 AM 1 comment:

Bringing in the sheaves 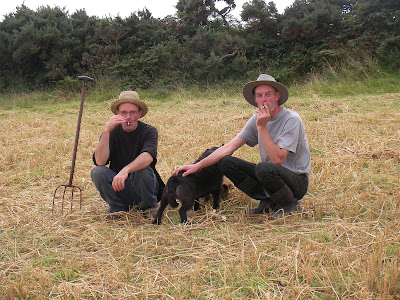 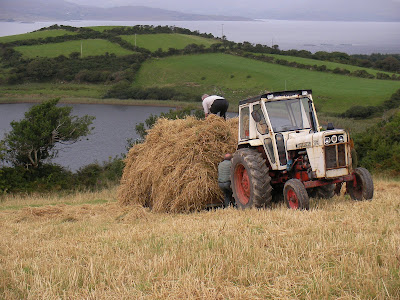 We brought the sheaves of oats in today, in a short window of fine weather. The rest of the field was combined and the oats are now being dried in various places, some in our barn. We didn't get there in time to see the combine, and didn't stay long enough to see the straw baled. The threshing of the sheaves and the party that goes with it will be the next phase and probably the most fun.
Posted by Madeline McKeever at 11:50 AM 1 comment:

This is what we had for Supper. The green tomato seeds were brought back from France, last year, by my friend Bridget. The variety is Evergreen and they are sweet and tasty inspite of their colour. This year she brought me back some buckwheat flour, which was the base of the batter. 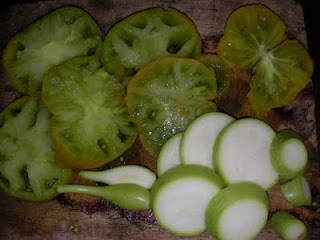 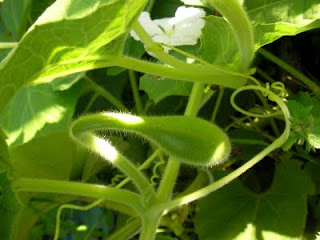 I didn't think Bottle Gourds would thrive outside, but as I had a few plants too many for the polytunnel, I tried them in a gap on the bean trellis. They love it out there, however, they have refused to climb the strings I put up for them and persist in smothering the beans. I had read that they were edible when small, and came across areference to battering and eating Lagenaria while blogging.
Posted by Madeline McKeever at 11:15 PM No comments:

I mentioned the Bantry CSA in a previous post. Well, today we harvested the first acre with scythes. The weather made using the reaper and binder impossible. The cut oats were tied into sheaves and stooked. Lots of tea was drunk and we are looking forward to the threshing. The rest will be combined.
Posted by Madeline McKeever at 11:58 AM 4 comments: 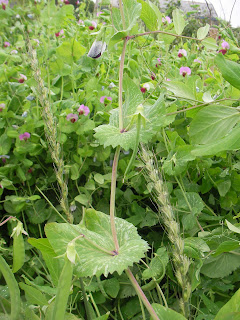 I got this perennial wheat from the Seed Ambassadors when they visited here. It was bred by Tim Peters. I don't know much about cereal growing and sowed it in spring. It didn't produce a crop the first year but did the next. It was hard to harvest as it didn't all ripen at the same time and I was busy so I shoved a bunch of it in a bag and tried to persuade other people to grow it because I couldn't even work out how to thrash it. It looked good during the winter sending up new shoots, but most of it died in the spring. I rotovated the patch and sowed peas in it. One plant came through, I don't know whether from a seed or an old plant. As a reward for its persistance I harvested the peas around it without disturbing it too much. 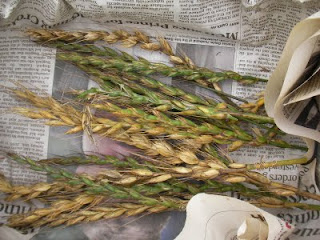 I harvested it yesterday, although some of the heads were quite green, more of them were getting mouldy. 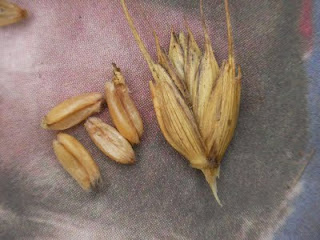 I was surprised how big the seeds were.
Posted by Madeline McKeever at 4:18 PM 26 comments:

Choughs shelter in our barn when its wet and the wind is from the West. Its nice except they pooh all over the tractor which is annoying. It would be nice if they would nest there, but I think they are a bit frightened of people. They used to nest in the castle in Whitehall but it has been turned into a holiday home and I don't know if they still do.
Posted by Madeline McKeever at 1:35 PM 3 comments: 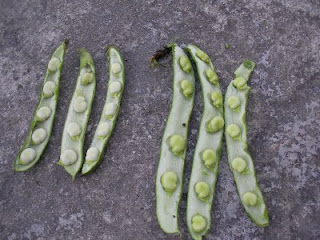 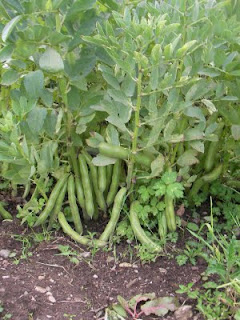 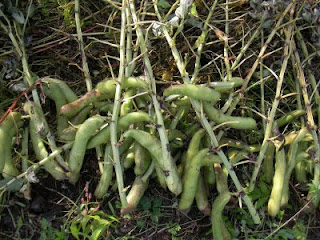 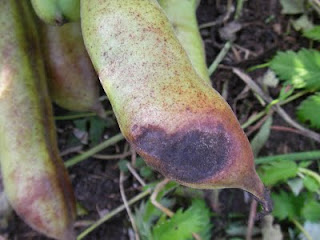 Posted by Madeline McKeever at 2:02 AM 3 comments:

We finished harvesting the peas today. There was a heavier crop than usual but the heavy rain caused a lot of damage to some varieties. the pods fell apart and a lot of peas were lost. The varieties that held o to their pods best were the heritage varieties 'Irish Green Pea' and 'Daniel O'Rourke'. The pods on these varieties are small and light and the plants stood up better than varieties with large pods and peas. It has been the wettest July on record at many weather stations in Ireland this year, with over 10" at Valentia Island in Kerry. 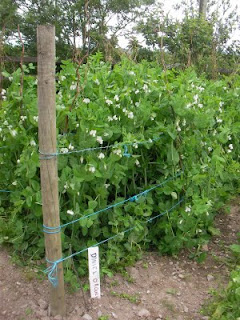 'Daniel O'Rourke' pea in June
Posted by Madeline McKeever at 3:06 PM No comments: