I have already spent a morning, this week in Teagac, rearranging my farm map, for the area aid, because not every square inch of my farm grows grass. Here and there there are gorse bushes and even briars! Last year my planner put a 'habitat' area into my area aid plan as 'foliage' and as a result I was penalised by a considerable amount.  I was not the only one, and this is the reason diggers and matches are out, all over the country, burning and clearing land, that is marginally useful to agriculture, but crucial to wildlife. 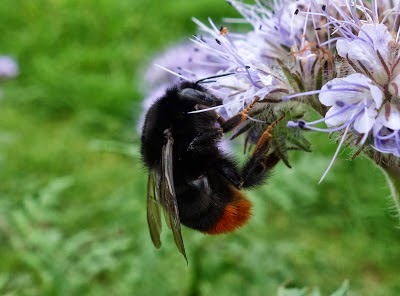 As an aside, I haven't heard a cuckoo in the last few years and they used to drive me demented at this time of year. Neither (for the first time), have I seen any red bottomed bumble bees this spring. They used to be the first to arrive in my tunnel to pollinate the broad beans and crucifers. (I took this photo from http://urbanpollinators.blogspot.ie/2013/10/bumblebee-queens-fat-bottomed-girls-in.html sorry!)

Anyway, I come home from the Teagasc outing, to find an email from  the Organic Trust, requiring me to be the subject of an audit by INAB. I had never heard of INAB but I looked it up and they are a body that inspects people who inspect people. I suppose it has to be done.

So they are going to inspect the organic inspector inspecting me, in August. It turns out the inspector they want to send is a seed merchant who sells imported, conventional seeds, from his website. So I suggest that perhaps a different inspect would be more appropriate. BUT this is going to cost the Organic Trust over €2000 because that's what INAB inspectors cost, and they have to get this inspector inspected. Also they have been told to inspect seed producers so they have to send the auditors to me, and as I am the only seed producer growing a significant amount of seeds. HMMM…. why are they choosing seed producers this year?

Organic Trust inspectors don't get paid as much as the INAB, but in the end it is the organic farmers that pay for this, because it costs us (I think it cost me best part of €500 this year, to be certified organic), and use an organic label on our food, when it doesn't cost anything to NOT tell people that their food has been treated with chemicals.

So, now they are going to send a conventional farmer to inspect me. I am ok with that, because there is no conflict of interest, and I have found her very well informed and fair in the past.  Organic inspectors cannot be organic producers which is fair enough, as there is scope for conflict of interest. And, I am sorry to cost the OT and extra €2,000. In the end consumer that pays for this, or mostly can't afford to, and so organic food becomes increasingly only available to the wealthy. I didn't go into organic farming with a view to supplying a privileged few with safe food.

When I finish REPS 4 this year, there will be a temptation to drop the symbol. My customers are largely home gardeners and small certified organic producers. It would not be profitable for me to sell seeds in large enough quantities for large commercial organic enterprises. Larger organic seed companies can produce seeds more cheaply than Brown Envelope Seeds by growing them where labour is cheap and the weather is better, and there are a lot less inspections.

Now I better do some actual work!
Posted by Madeline McKeever at 6:01 AM