Who Let the leeks out 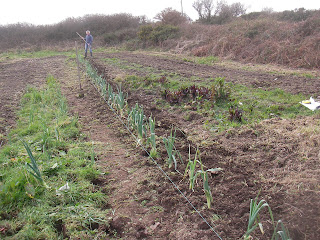 On sunday we decided to take advantage of the dry weather and plant out leeks instead of going on the St. Patrick's weekend charity walk.We were suddenly joined by lots of hounds who seemed to be having a lovely day out on their own. Apart from lots of SUV's going up and down our usually very quiet road there didn't seem to be any huntsmen. I don't think the wild-life was in much danger, but I am not sure where I stand on this - carefully on the fence, I think. On the one hand, its a nice day out, and foxes aren't that nice to rabbits and chickens, on the other hand, we could have an equally nice day out with a camera, shooting the wild-life without any blood.
Hopefully we will have leek seed next year. It has failed for the last two years. We ran out of the 2006 Solaise Bleu seed recently and the 2007 and 2008 seed is very poor. These leeks are Hannibal, also known as Autumn King, I prefer to call them Hannibal so as not to confuse them with the carrots. In the orchard we have Hilari, and I have sown Musselburgh and Solaise Bleu for 2010.
Posted by Madeline McKeever at 2:09 AM